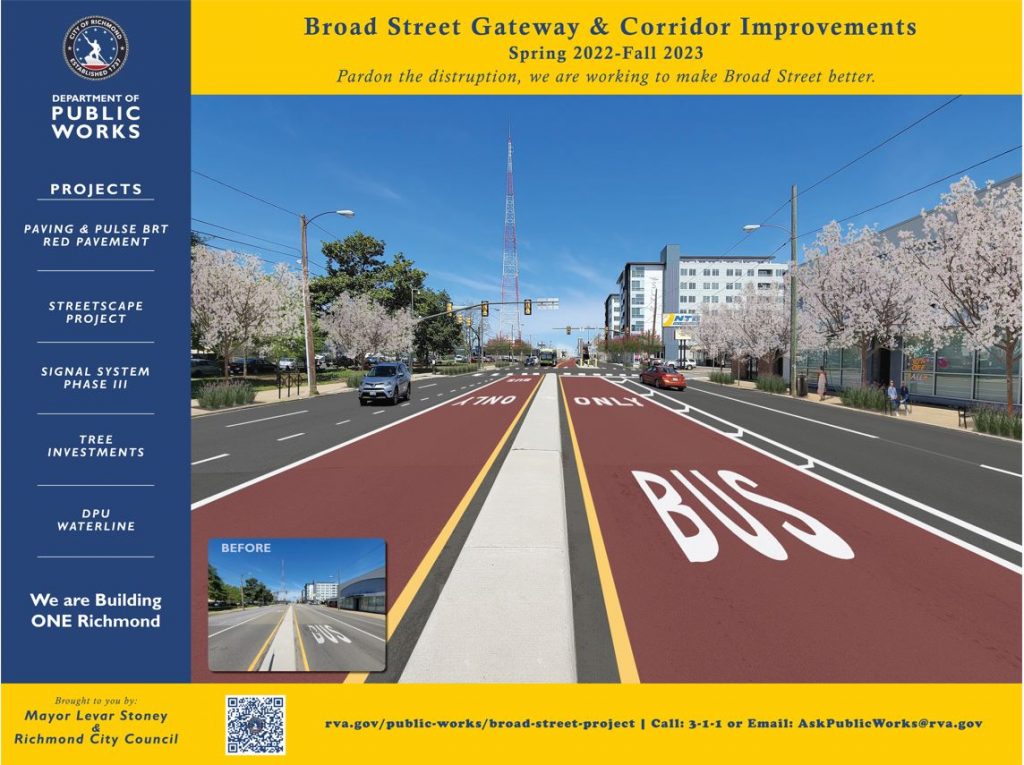 Abstract: The past 6+ years have seen significant public investment along the City’s most well-known corridor: Broad Street.  Beginning with the TIGER-grant funded Pulse BRT project that opened 2018, the City of Richmond is following that project will additional investment and improvements in the corridor.  These include resurfacing the entire corridor from downtown to the county line with a special asphalt mix, streetscape improvements on the sidewalks from I-195 to VCU, and red dedicated bus lanes to name a few.

Implementation of these improvements began in April 2022 with the start of 24 lane-miles of pavement resurfacing, which has since been completed in under 6 weeks.  The new asphalt surface includes a special mix, including aramid fibers similar to kevlar to add additional strength and resist reflective cracking from the concrete surface below.  Following the paving, the City is using a Virginia Department of Rail and Public Transportation (DRPT) demonstration grant to add a red color to the surface of the dedicated Pulse BRT lanes in the median.  The use of the red color, which required special approval from FHWA, is intended to reduce unauthorized bus lane usage to improve travel times of the bus and the safety of all roadway users.  Also recently under construction are VDOT SMART-SCALE funded streetscape improvements along Broad Street.  Spanning from Hamilton Street to Laurel Street, the improvements include new sidewalks, better defined pedestrian, street-furniture, and business/café-seating zones in the sidewalks, new and enhanced landscaping and trees, and other pedestrian-focused design elements.

Jon Oliver, P.E., is a transportation engineer at Kimley-Horn with more than 10 years of engineering and design experience on a variety of public infrastructure projects. He has a passion for urban design and alternative modes of transportation—including pedestrians, bicycles, transit, and ADA accessibility. Jon was key member of the Pulse BRT project team that transformed Broad Street a few years ago, and now is assisting the City with multiple improvements along Broad Street to compliment the Pulse corridor. A native of Conyers, Georgia, in the metropolitan Atlanta area, he graduated with a Bachelor of Science in Civil Engineering from Clemson University and a Master of Science in Civil Engineering from the Georgia Institute of Technology before moving to Richmond in 2011. In his free time, he’s either spending time with his wife and daughter, running, or doing projects around his century-old Richmond home.

Kenny Horak  have been in the asphalt industry for the past 40 years . He got his start running an asphalt plant and generating mix designs that met VDOT standards. Over the remainder of the 40 years he has worked his way up to operation manager. Kenny has been with the City of Richmond for nine years . When he started with the City, the City was resurfacing 50 to 60 lane miles a year and now the City is resurfacing 250  plus lane mile each year under his direct supervision. Kenny also oversees the sign and pavement markings division.  The City also maintains a current Pavement Condition Index (PCI) on all City streets. That is a program that assist with preparing a paving program for each year. The City has  a good relationship with VDOT and the City performs test projects in conjunction with VDOT with regards to test mixes to help VDOT obtain data in a urban setting with regards to new asphalt mixes.

Attendants will receive 1.0 PDH from this technical meeting. Cost is $30 for members and $35 for non-members. Price will increase June 22nd. Lunch will be provided.